Everyone I know now, when in Chinatown goes crazy looking for these little yellow mini sunshines of delight!

Who has em? who makes the best? Are they open? did they run out? Dan Tat selfie!

But did you know that Dan Tat are not Chinese!

If you ever been to a Chinese bakery or dim sum house, you have seen these little golden bites of sunshine! there is always room for Dan tat!

I grew up eating Dan Tat at my dad’s tea house except when I was little I was not a fan of puff pastry so I would just scoop out the filling and 5-6 dan tats later I was good with the empty shells around me.

So, my dad made a special dish for me which I will share later…

Chinese have been making Dan Tats since the 20th century…

Lets start with the Hong Kong style, they started showing up around the 1940’s via Guangzhou.

But they ere only served in upscale restaurants, the Hong Kong version are smaller normally served 3 per order. Vs the original Guangzhou which is larger and serveed as single. The more upscale versions can contain chocolate, birds’ nest, or abalone.

Now before Hong Kong there was the Macau version where a British pharmacist in 1989 start a bakery where they attempted to make the original Portuguese Pastel de nata!  This version is called Po tat.

The main difference is the Macu version a more caramelized brown top which is much closer to the Portuguese version. 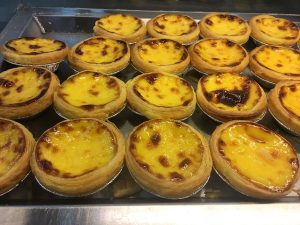 In 1999, Wong sold the recipe to KFC, which then introduced the Macau-style pastel de nata to other Asian countries.

Pastéis de nata were made by catholic monks before the 18th century at Jerónimos Monastery. 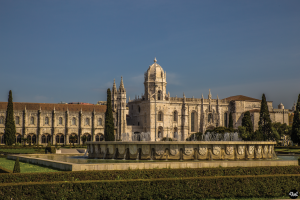 Home of the Pastéis de nata.

Here is an interest thing back then they used egg whites as starch for clothing, so they had a lot of egg yolks which they used in baking and desserts.

So that is the brief history of pastel de nata!

Depending where you are you can find all kinds of odd variations you never thought of.. in San Francisco a  place called Spoons Patisserie Makes Dan Tats with flavors like green tea, almond Egg white, Vanilla, Caramel and many other flavors. 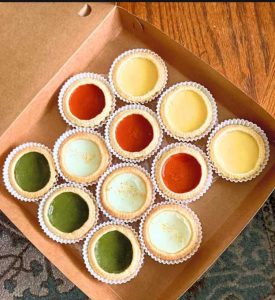 So, you may be thinking which one do I like? Most of the time in the NYC Chinatown you will find they do the puff flakey pastry version mostly and the filling it is remarkably simple and has these simple variations.

Some will have milk or evaporated milk the others will just use water for liquid using only water will make a more wobbler custard using milk and more egg yolk makes a richer custard.

The crust only has 2 variations ether short crust or puff pastry.

So, do you like a richer custard or more silker custard? Puff or short crust?

So, here is why i think people say a place has the “best Dan Tats?” It is because the crust may be flakier and more tender than others.

In order to have the softest most buttery, and tender Dan Tat it should be served soon after it is removed from the oven. The longer it hangs around the staler it will be.  Now back to my dad I was eating up all the profits, 5 dan tats fillings,3 wife cakes… moon cake with egg yolk? no thank you. honey crispy noodles and white sugar rice cake yum!

So, my dad would make me steamed egg custard! so i would not eat all the Dan tats.. Its ones of the easiest recipes to do…

So here is the recipe.

For every egg use 1 cup of milk and 3 tablespoons of sugar.

So It makes 8 portions

Wisk the eggs with sugar

Strain this through a fine mesh strainer.

Pour into a bowl.

Put bowl in hot steamer like a wok and cover.

Server with the clear liquid which is a sweet syrup formed by the steam and sugar.

The top layer with not be smooth which is how it should be.

optional if you want a smooth top cover the bowl with cling film and steam.

You will create a smooth top but no syrup. I prefer the original way.

Wait oh you wanted a dan tat recipe too? Hmm

Make a Simple syrup which is

Mix the sugar and water till sugar dissolves. that is simple syrup.

Let it cool down.

Now combine everything with the cool down syrup.

Pastry I am going to go with a short crust today instead of a flakey pastry.

Why? Because it is easy and fast and different. You can look up how to make puff pastry or wait for me to post a recipe for it. You can also try buying a premade puff pastry from the frozen food section.

If you do use frozen puff pastry make sure to roll it a little thinner.

Put the flour in a large bowl add the salt.

Now you want to work fast with this.

Keep doing this till you can form a dough ball if the butter is melting too fast stick the bowl in the refrigerator.

Once all the butter is incorporate into a nice dough ball wrap with saran wrap and put in the refrigerator for like 15 minutes.

Remove dough ball from the refrigerator and divide in half. Flour your board well and the same with your rolling pin.

You want to roll the dough gently out to about a ¼ inch thick. After every roll make sure the dough is not stuck to the board.

You should have your Dan Tat molds/tins ready make sure they are sprayed with a nonstick spray oil. you can even use cupcake paper cup just be gentle.

Use a ring cutter larger than the mold.

Cut out circles with the ring mold and place on the mold or tin gently form the dough into the bottom of the mold.

Any excess can be scraped off the edge of the mold with a knife.

Poke a few holes in the bottom of the dough in the mold with a fork so steam can escape.

In a preheat oven of 400 degree

Place the shells on a baking tray and then pour the custard mixture into the shell almost fill to the top but not to the crust line. Or else it will overflow.

Place in oven for 20 minutes check to see if you have a light browning on the edges once you get a slight light brown turn over down to 350 degrees and cook for another 15 minutes. Checking every 5 minutes to check color for doneness. Once done turn off oven and leave the tart in over with the oven door slight open you can use a chopstick to keep door open. Let rest in oven for another 5 minutes. Then remove and serve warm! 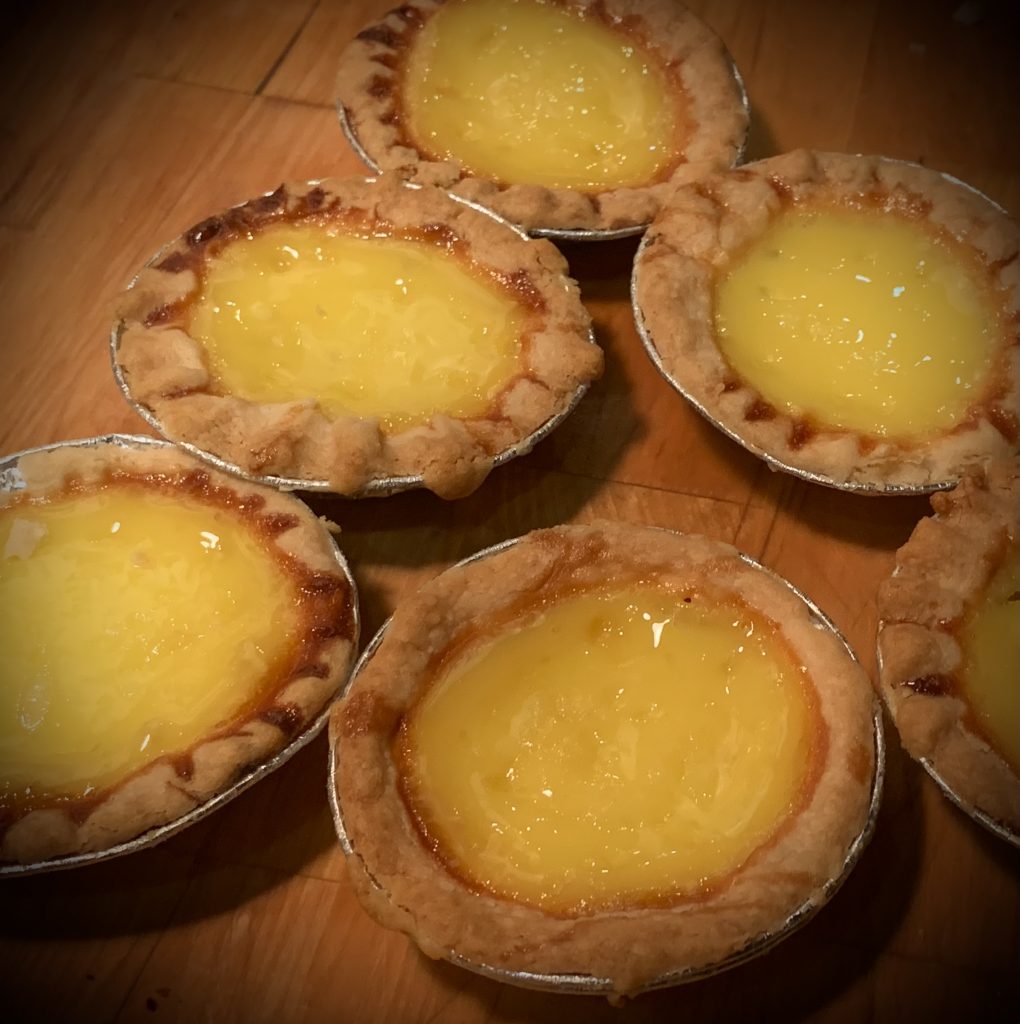