By Tommy Gunn|2020-12-13T20:00:39+00:00May 6th, 2020|0 Comments
You got mail!
I started using a computer in 1986 back then the world was beginning to change but no one knew it yet…
I used to communicate using a modem at very low speeds 300 baud to be exact. I used to run a bbs which is a bulletin board service where people could post messages and files for each other. Depending on how many lines you had, sometimes you had to wait and try back when the line was free to log in.
There was also ARPANET which I started using which was the real internet the kind you saw in the movies no graphics just text we used things like telnet, finger, gopher, and Archie…Archie was the google of the time this was our playground.
But then dial Up services like CompuServe offed internet access for 3-6 dollars per hour in 1989 with a very basic interface to connect to services like weather, travel info including flight and tickets, games, and various other interests.
But it also included mail! we called it compuspend we had access to the internet already for free. Eventually they got bought out by AOL.
In my opinion they were the first real spammers they had a campaign which was a cd in a cardboard envelope that got mailed to everyone, it was an insert in the Sunday, magazines.

Then as emails got popular we would get an occasional stray email. Gary Thuerk sent the first email spam message in 1978 to 600 people. He was reprimanded and told not to do it again. Now everyone gets spam every day it a way of life ether in your physical mailbox or in your inbox. I will do another more detailed post on the cool history of my or underground secret internet soon about hacking, pirates, IRC cops.
Junk mail got coined from a Monty Python skit with a dinner full of Viking and where the whole menu contains spam…

Spam was introduced in 1937 when pork shoulders were not a popular cut of meat. So Hormel grounded the pork and added seasoning in the meat but they need a name so they had a contest for 100.00 for anyone that came up with a name for the product. The winning name was spam which was short for spiced ham.
This was mocked in a movie called Mr blandings builds his dream house. He had to come up with a slogan for his client his maid came up with “ if it’s not wham it’s not ham”
During WWII it was hard to fresh meat to the battlefields so spam became a staple for the soldiers, of course, they had nicknames for spam…like ham that didn’t pass its physical, meatloaf without basic training and Special Army Meat and in the UK it was introduced because of the lend leasing act and rationing.
The lend-lease act was for our alias who fought with us we supplied them with food oil and material, warships, and weapons. Spam would go where ever soldiers went Guam, Hawaii the Philippines, etc. Every place they went… spam found a home. A good example is Hawaii where the locals eat it almost on a daily basis and the favorite way is like a sushi fried and served over a block of rice and wrapped with nori.

One more crazy thing that they actually made kosher spam at one time point in time.Now they have over a dozen types of flavored spam.
I like spam every once in a while I make em crispy with a fried egg and cheese sandwich .
But I think spam goes best with rice because spam itself can be a bit salty and the rice cuts through that.
So I made spam fried rice with a few simple ingredients:
2 cups of rice then cook it…
3 eggs
½ onion
Frozen green peas
Scallions
2 tablespoons soy sauce.
Green or red peppers
3 tablespoons Oyster sauce
2 tablespoons or more Dark soy sauce (this gives it that dark color Americans like Asians like it lighter)
1 thumb minced ginger
3 cloves minced garlic
1 can Spam diced
In wok or large skillet heat pan till very hot add canola oil and heat to almost smoking
Add dice spam cook till crispy but not dark. Remove and put in the bowl. Put the pan back on the heat.
Add onions and peppers cook and stir fry for 2 minutes remove put peppers and onion in the same bowl as spam.
Scramble 3 eggs pour into hot pan swirl eggs around stir and start breaking egg up into small pieces.
Break and stir till eggs are cooked remove and put into spam Bowl.
Heat pan high till Almost smoking add oil wait one minute add about a thumb of minced ginger and garlic stir for 30 seconds add the cooked cooled white rice break and stir till the rice look like it has a little shine from the oil stir fry for about 2 minutes do not let that rice stick to the pan keep scraping bottom and bring rice to the top.
Add a teaspoon of sesame oil stir into rice
Add green peas
Add oyster sauce and dark soy stir
Add the bowl of spam and vegetables stir for 2 minute
Add scallions and soy sauce taste and adjust seasoning.
Done!
The spam works so well with the fried rice it can easily become a staple go-to recipe.
All the flavors pop from the garlic, sesame oil spam, etc.
Spam fried rice it just works… 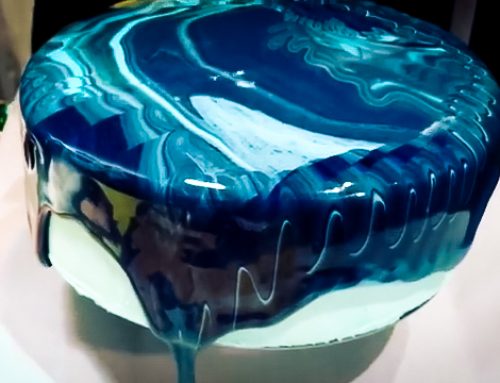 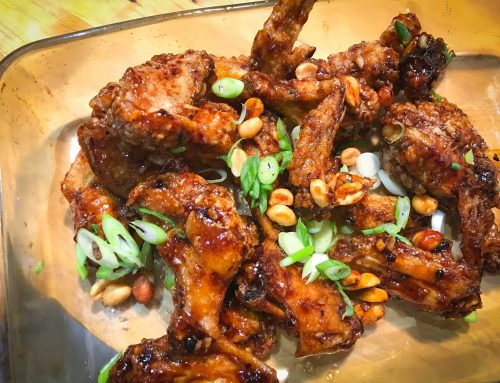 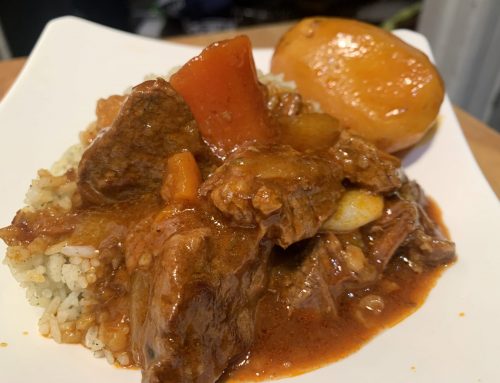 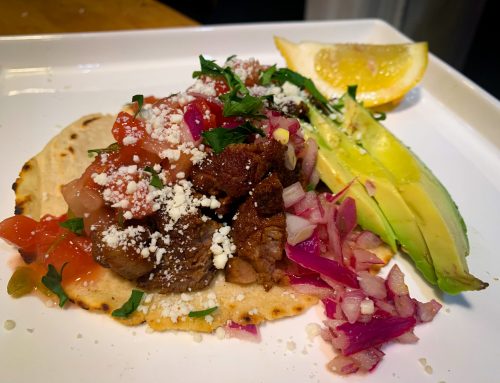 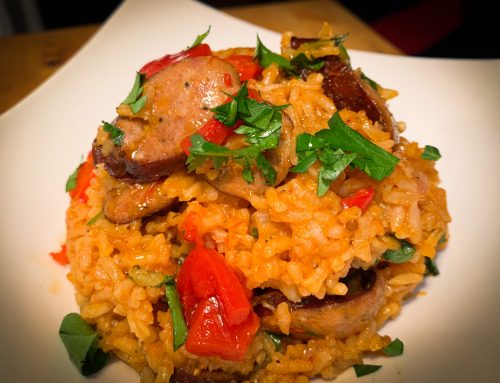 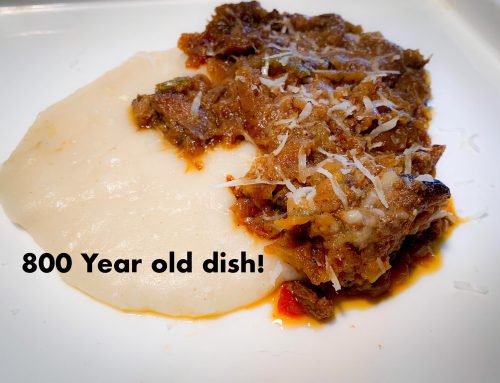