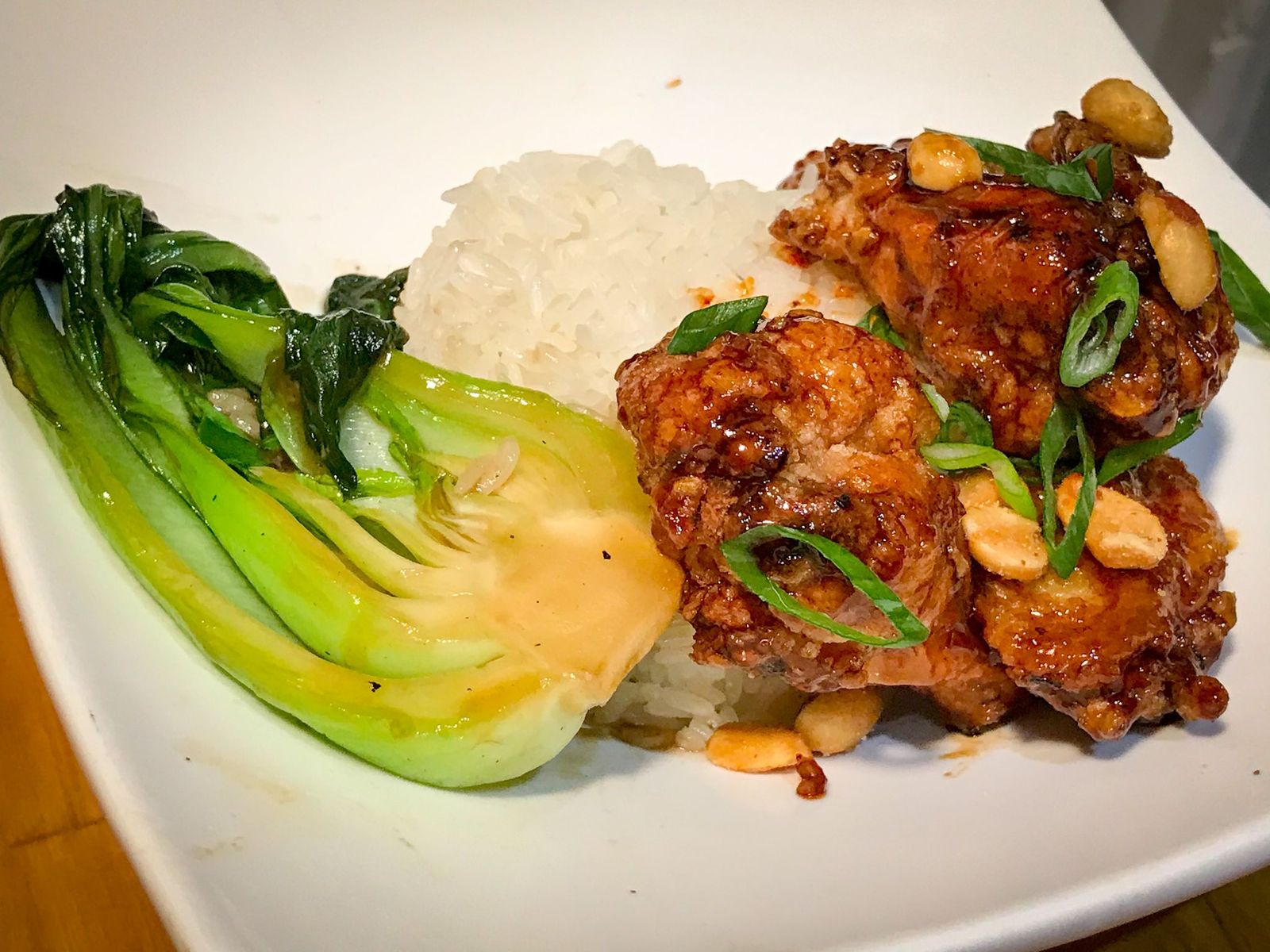 Why did the chikin cross the interstate…

Sorry, not sorry… I have not had much time to write my food posts story’s normally they take about 2 hours to write.
But I kinda got sidetracked with what started as a simple part swap for one of my 3D printers we decided to rebuild and upgrade everything with new wiring, custom printed parts, nozzles, etc.

At the same time I have been teaching Jesse a cad designing program Called fusion 360, and he also wanted to learn more electronics, so now programming and electronics have been throw on the table for me to teach him he seems to be interested in biomechanics now.

And myself I have been learning unity for game coding and virtual reality programming. But I have been cooking every night with good stories behind them. I just have not had time to write them down I have also been fixing up my old website to move all the posts there.

Growing up in New York City was Not the capital place for fried chicken at least In my hood Chinatown.
My dad used to make an incredible ginger garlic fried Chicken which I now think I Can make.

But there was no buttermilk fried chicken or southern-style chicken in my area I am sure way uptown there were southern fried chicken joints you could find But the closest thing was KFC Kentucky fried chicken for me. Our chicken tasted nothing like KFC it must have been those 11 secret herbs and spices.

So when a KFC open near us it was treated to go I finally had a chance to see what colonel sanders was talking about in his fancy white plantation outfit.

He would strut around like an old pimp selling drugs talking bout how good his chicken was because of the secret shit he did to it walking down by the plantation house with his cane.

I wanted finger lickin good chicken with biscuits mash with gravy then Maybe I could learn the secret recipe.

Sounds like a fancy man? well the truth is Saunders had the worst luck and had many jobs that fail he joined the army at 16 got discharged at 17, studies to be a lawyer, but got thrown out, then got various jobs as a painter, train conductor, dishwasher, fireman, insurance salesman but got fired.

He founded a ferry boat company then sold it to start a lamp company but did not know about his competitors made a better lamp.
Eventually he bought a roadside gas station and started selling pan-fried chicken out the back. It became very popular and he was able to open a 140 seat roadside restaurant and motel.
Finally some good luck! In 1937 the state’s governor awarded him the title of colonel.

People snicker at the title but he wore it proudly and it stuck. Later on he started wearing a black coat with a string tie after some time he switched over to a white suit.

It was going great till the 1940s when ww2 came around and gas rationing started. Sanders had to shut down his pumps and tourists stopped traveling.
He was limping and scraping by and living off his savings. Then the war was over..and guess what? They were building new interstate highway miles from his restaurant and gas station.
It was time to retire..at age 65

Then he found out he was only going to get $105.00 A month it was time to start a new business franchising his fried chicken .
He started going to restaurants trying to sell his recipe and he wanted 4 cents for every chicken they sold.. He slept in car traveling city to city town to town.
he got rejected 1009 times but on the 1010 time he sold his first franchise in 1952. By 1963 there were 600 KFC’s franchises and in 1964 he sold his rights for 2 million dollars.

But on the other side of the world in Korea fried chicken was not a thing they either ate roasted, Steamed or boiled chicken.
Meats were scarce so they used every part.

During the 1940s and 50s American troops were stationed in Korea and in the 50’s they started setting up stalls and started selling soul food like fried chicken.
Then in the 60s crispy chicken started catching on when Myeongdong Yeongyang Center in Seoul began selling whole chicken roasted over an electric oven.
Then one of the first fried-chicken places in Korea was called Lims Chicken, owned and run by Shinsegae Department Store, which was established in 1977.

The thing with Korean fried chicken or KFC is it is fried twice and the sauces can sometimes make a shell to make extra crispy coating also chikin is Korean for fried chicken.

The way I make mine is pretty simple…

First I mince finely 1-2 tablespoons of ginger and the same with garlic.
Then I Pat dry all my chicken parts.
I add all the ginger and garlic with the chicken and I mix well.
Then I have a bowl 2-3 cups of corn starch or potatoes starch.
I put 1 piece of chicken in the bowl and coat and squeeze the chicken with the starch till it all coated well.

Tap excess starch off place the chicken on a rack or tray do this for the rest of the chicken, the should still be bits of ginger and garlic on the chicken.
Let rest for 15 minutes.
In a pot of hot oil 340 degrees slowly add the chicken if the oil stops bubbling wait before adding the next piece of chicken.
Don’t overcrowd the chicken fry for about 10 minutes or until light brown.
Remove from pot and place chicken on wire rake or paper towels.
Fry second batch if necessary let check rest for 10 minutes.
Refry the chicken again this time till it turns golden brown or crispy.
You can tell by tapping the skin with a spoon to tell how crispy it is.
Remove and place it on the rack again.
Heat a wok till its hot
add like a tablespoon of people or canola Oil.
Add 1 teaspoon of garlic and 1 of ginger and stir
Add 1 tablespoon of soy sauce stir.
Add 1-2 tablespoon of Gochujang Chile paste
Add 3 tablespoons of Korean barbecue sauce
Add ¼ cup of brown sugar
Add ¼ of honey
Stir everything and keep stirring till it gets kind of bubbly and thick.
Add chicken and stir and coat all the chicken evenly.
Add dry roasted peanuts or honey-roasted peanuts.
Add chicken and stir and coat all the chicken evenly.
Once all check is coated evenly remove from wok and place on rack.
Top with scallions
how good is it? It’s sweet crunchy spicy and so good you would eat the bone if you could.